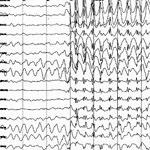 There’s a terrible scream down the hall, followed by a crashing sound, a summation of metal and drywall and flesh colliding. I run down the hall and open the door. I watch in horror as a body seizes on the unyielding floor. His back is arched, an invisible meat hook hoisting him sadistically upwards. He’s not breathing. Every muscle in his body is contracting simultaneously, and it seems as if his chest is about to explode. His eyes are buried deep in some internal possession, darting about, scanning an unseen inferno, and summoning him from this hell feels impossible. Powerless, I hold the back of his head as it repeatedly mashes my bony fingers into the floor.  I use my free hand to dial 911. The blitz is contagious, and I struggle to keep my own voice unshaken. At some point I must have also yelled for help, because it is finally flowing into the room.

I’ve seen a few seizures, and I find them extremely upsetting. There is something about the uncontainable shudders and vanishing of consciousness that humiliates the human condition. To look at another person, gone while sleeping, can bring a calming peace of mind. But to be riveted in terror at the spectacle of another body convulsing, mutinously, its master imprisoned somewhere deep within, is supremely disturbing. You can’t reach that person, and in that moment you don’t know if they’ll be coming back.

The tetany and violence subsided, but were immediately replaced by awful snoring sounds, gurgling with spit and blood from a bleeding tongue. We rolled him over to one side so that he wouldn’t choke on his own fluids, and gradually some consciousness returned. And then there was a startled look, a waking confusion of where am I and what the hell are you all doing to me? A frightened, wide-eyed pushing away of people and their calming consolations in this ugly reawakening followed. He couldn’t remember the preceding minutes of his own life, and it was 2001 in 2009. But slowly, minute by minute, he resettled in his own skin, reclaiming dominion over the sore muscles and wracked bones that had just betrayed him.

You can’t fault those who believed that seizures were due to possessions, demons, or other spirits, and did what they thought might help. Those who persecuted and even killed epileptics deserve special scorn in our collective human history. Watching a man convulse through an ostensible spiritual evisceration, and then witnessing his merciful return, elicits in me a shuddering awareness of the fragile and miraculous hold we have on our own consciousness in the world.

4 thoughts on “To Witness a Seizure”