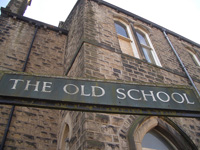 Welcome to Grand Rounds, a weekly gathering of medical people interested in sharing their best writing from the past week.  I was there in the beginning, back in 2004, when Grand Rounds first started.  Some might say that makes me old, but I prefer the term old school.

Scattered among excellent posts are flashbacks to the old school world of 2004 in which Grand Rounds was first conceived.  To add some extra relevance I’ve visited some of my favorite medical blogs and mined them for good stuff. Here we go, Old School Grand Rounds, a nod to 2004 when it all began, with some of my homies lending their street credibility:

Orac of Respectful Insolence considers the slurs that compare Obama to Hitler, and Healthcare reform to Nazism, and how congressman Barney Frank expertly responded to a particularly rabid critic.  Orac calls for Democrats, Republicans, and the media in general to speak out more bluntly against such outrageous accusations.

Dr. Schwab, author and surgeon, rebuts the “utterly, idiotically, cosmically ass backwards” interpretation of HR 3200 by Betsy McCaughey, as seen on The Jon Stewart Show this week.  He calls for honesty in the debate over end-of-life decisions.

Kevin, M.D. is a tireless medical blogger and proponent of a strong primary care system. He recently published an article on CNN.com about the dual imperatives of increasing Americans’ access to health care and bolstering our nation’s primary care foundation.

Newly published author (congratulations!) and family physician Dr. Hornstein considers what makes a student choose a career in primary care: “Some decisions should be made with the heart instead of the brain.”

Want to know what an NHS doctor in the U.K. thinks of America’s health care squabbling?  Dr. Crippen’s perspective is quite opinionated and fascinating, and shows that many outside the U.S. react to our uninsured and underinsured masses with as much horror as they did when Katrina exposed the shameful realities of poverty in America.

Tara Parker-Pope runs the New York Times Well Blog, and one of her guest authors, Brian Nelson, courageously writes about his numerous medical adversities, including 3 kidney transplants, a pancreatic transplant, chronic Type I Diabetes, and a recently disfiguring surgery for head and neck cancer.  You can’t read this piece and not be moved.

Dr. Rosenbaum, a sports medicine doctor at Wake Forest, has an excellent post about the 18 year-old running phenom named Caster Semenya, who unfortunately made international headlines after the track and field authority IAAF ordered her to undergo “gender testing.”  Other runners have accused Semenya of being a man posing as a woman.  The ensuing debate over what constitutes one’s gender, or even one’s genitals, is more complicated than you might think.

“I felt unkind for having resented his earlier demeanor so, and clueless for not having remembered that hostility almost always conceals some kind of fear or pain.”  Good literary-style case from T. at Anesthesioboist.

I’m not sure if the Founding Fathers sacrificed their dignity and used tobacco smoke enemas, but Dr. Lamberts at Distractible.org explores the many purported uses of the “medical” relic.

Maria of Intueri.org has a very in depth analysis of psychiatric principles, in which she concludes: “Not to get too shrinky about it, but in prescribing medications to people, psychiatrists can send the message, “There’s nothing you can do to help yourself. Here. Take this pill instead.”  She acknowledges the importance of medicines, but refuses to reduce everything to a pill.

If you can make sense of this crazy ECG, then you are a better doctor than I.  Via Grunt Doc. Hint – I suspect either electrical shock therapy as he’s claimed, or perhaps the patient was Magneto (HIPAA rules prohibit divulging X-men’s identities, too).

High fructose corn syrup, government subsidies, and large cans of soda amaize Dr. Logan as he reads The Omnivore’s Dilemma. Did you catch the pun?  Wasn’t that awesome!  Nurse Barbara Olsen contributes a post in the same vein, lamenting the rise of the Happy Meal and childhood obesity.

Rita Schwab of Supporting Safer Healthcare highlights the danger of granting temporary clinical privileges to physicians and other providers before taking time to carefully evaluate their credentials and background and smugmug coupons.

Emily Dickinson’s poetry marks an occasion for Laurie Edwards to reflect upon the importance of patience and hope.

And speaking of poetry, an Oncology Nurse crafts a lovely poem about a couple she’s taken care of. So much misery and beauty in this calling, and it helps to put thoughts into written words.

Another excellent bit of reflection from Reality Rounds, connecting the timeless words of Shakespeare to a modern ER situation in 2009.

Dr. Penna has found a useful compendium of mobile applications for the physician with iPhone-type skills.

Given that Jewish cuisine is a collection of cookery traditions linked by Jewish dietary laws and holiday traditions, and that certain foods, notably pork and shellfish, are forbidden, how can an Orthodox Jewish patient be allergic to Shellfish?  A puzzle by Allergy Notes.

Dr. Auerbach of Healthline reflects on the lessons learned from the Australian wildfires, and summarizes a few key points for survival.  Medifast coupons.

Chocolate consumption seems to be higher for those with Parkinson’s Disease, according to research discussed by Dr. Shock.

Laney from Nursing School Chronicles adds a brief post about the *ahem* inappropriate behavior of one of her 4 year-old patients.

And finally, a quote from the 2004 Grammy Award Winner for Record of the Year, Clocks written by Coldplay:

Confusion never stops
Closing walls and ticking clocks
Gonna come back and take you home
I could not stop what you now know
Singing: Come out upon my seas
Curse missed opportunities
Am I a part of the cure
Or am I part of the disease?

Dr. Joseph Kim hosts next week’s Grand Rounds at Medicine and Technology. I’d like to thank everyone for their great posts and contributions to the medical blogging cloud. Grand Rounds does help sustain community, and helps to introduce new voices that will rise through the meritocracy of ideas.